I was watching "Pawn Stars" tonight and saw them buy a first edition of David Copperfield by Charles Dickens. The guy who sold it says that he is not a book collector but could use the money.

Charles Dickens was one of the most popular writers of his time. He was not only a genius in his writing but he also marketed his works in a forward thinking manner 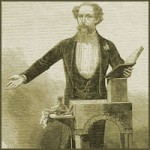 Dickens wrote 15 major novels and countless short stories before his death on June 9, 1870. There is so much to learn about this impressive lad that grew to be more famous than he would ever realize. If you are interested in a pretty comprehensive

article on his life and times, you can check out this article - Charles Dickens: The Life of the Author. (Fathom.com courses taken off line) It is compelling, interesting and you will learn something there for sure.

If you are a book collector and come across a first edition, there are a few things that you can check for authenticity. One is that there will be only one publishing year listed. At the time of the writing and publishing of David Copperfield, they had begun to include each year that the book was published. If you find that there is only one year listed, you can further check to see if it is the first printing for that publication. A strong indication of a first printing is whether there are any spelling errors. Typically the first edition would have some and then a subsequent printing in that same publication would have had them corrected.

Leave us a comment and let us know if you have been able to collect any rare and impressive works. We would love to hear your story.