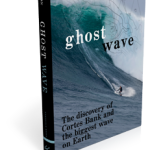 new book has arrived on the shelves and will especially interest those of us who love the ocean and anything to do with it. "Ghost Wave: The Discovery of Cortes Bank and the Biggest Wave on Earth" by Chris Dixon.

The book informs us about the infamous and dangerous seamount located about 100 miles off the southern California coast, that creates some of the world's biggest and most mystical waves. The title - "Ghost Wave" perfectly describes this terrifying wave. Chris Dixon describes the wave as "a ghost wave that was said to appear, a wave of massive proportions that came out of nowhere, rose like a monster and then slid back into the depths without a sign of its passing." George Hulse, a local pro surfer at the time who lives here in San Clemente, was the first to ride the wave back in 1990. George along with Bill Sharp, Sam George and photographer, Larry Moore took off from Newport Harbor in a 29ft boat for a secret surf mission. They had heard that it was possible that the bank had potential for waking up and they wanted to witness it.

There have been many surfers over the years who have conquered the enormous wave. Among the most recent is San Clemente's Greg Long who has ridden the break out there on days when the waves are reported as being over 100 ft.

Curious? Head on over to the web site - GhostWaveBook.com - to read more, see a video book trailer and read a little more about the author. You can also check out a recent article in the OC Register written by Fred Swegles.