Surfing was originally referred to as wave riding which originated in Western Polynesia thousands of years ago. Fisherman introduced the idea of riding waves on boards in order to be able to catch more fish and travel back to the shore. 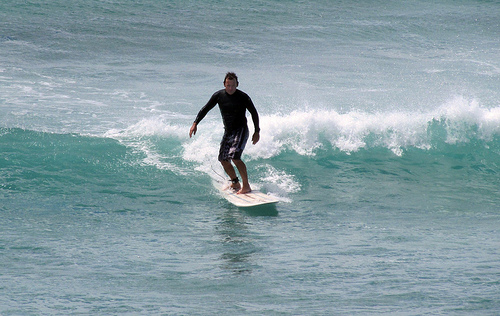 Like most practical tasks, wave riding eventually evolved into a leisure activity and the 15th century has been said to have witnessed stand-up surfing for the first time on the Hawaiian Islands. This pastime was called

"he'enalu" which translates to wave sliding and began to be regarded as a sport. Actual records of surfing appeared in the 1700s by Europeans who travelled to Tahiti and made contact with the Polynesians.

Polynesians later settled in Hawaii and were already equipped with skills for surfing which was at first a simple sport that lend itself into an advanced activity in Hawaii. Generally, Hawaiians from the upper classes would ride the waves on boards that received sacred rituals before they were constructed out of specific types of wood.

Now, surf boards have become more advanced in shape and material, including styrofoam and fiberglass. As far as design is concerned, surf boards are now lighter and easier to maneuver. The surf board is the most important surfing equipment and it is recommended that beginners use styrofoam boards that are large enough, such as 10 feet long, to catch waves easily and to avoid injuries.

The Hollow Board and the Hot Curl Board have been significant inventions for being able to maneuver better and go into the curl of the wave. Later on, the short board emerged along with various types of numbers of fins to improve speed as well as maneuverability. Surf board leashes can be useful and often important accessories for protection and more control.

Wet suits have been another significant invention in the history of Surfing. The first wetsuit was created in the 1950s in California, which allowed for year round surfing, especially during the cold weather. Made of neoprene, a synthetic rubber material, the wet suit also resulted in surfers coming up with more advanced and complex surfing techniques as they provide more movement. Wet suits should fit well and not allow a lot of water in to keep the surfer warm.

Although longboard surfing is a popular activity today on coastal regions and on islands, it has quite an old history. Surfing has been able to establish itself as a cultural tradition that is enjoyed by modern people in various regions. It has even become a sporting event that is exhilarating and thrilling.