Skip to Content The Evolution of the Cotton Picker in America - HeavyTShirt.com

Despite the fact that the first patent for a mechanical cotton picker being issued in 1850, cotton picking was mostly done by hand until the end of world war II. This was, in fact, due to the following factors. Mechanical Pickers proved to be a very difficult invention. The great depression provided ample amounts of really cheap labor, and World War II limited metal and other natural resources needed to manufacture equipment.

Initial mechanical picker designs used a spindle to grab the cotton, but their efficiency was poor and the process of designing a mechanical picker was long. Many inventors spent decades trying to perfect their designs. Most designs simply left too much cotton behind on the plant. John Rust created a machine that in 1936 solved the problem. Rust's picker debuted to the much amazed gathering of cotton growers because it could pick efficiently at the rate of 50-100 workers. Rust's machine used moisture to efficiently to harvest cotton, but public opinion and fear of what would become of the sharecropper system in the South put up opposition despite the fact that Rust's machine would reduce labor costs of picking cotton by as much as 75%.

Economically, this invention changed everything, including the social fabric of cotton growing. Despite the abolition of slavery, labor was needed to harvest cotton. That labor came in the form of share-cropping. Other inventors tried too. International Harvester invented a machine that used a barbed spindle to collect cotton and a doffer to remove the cotton from the spindles. In 1950, Deere and Company, 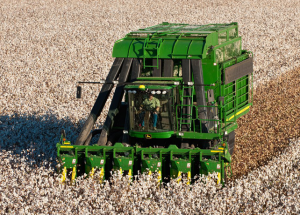 developed a two row picker that increased the volume of picked cotton by 100% over the International Harvester model. Meanwhile, back on the farm, Rust spent the time during the war to redesign his picker to compete with other commercial models. He found financing and built 1000 pre sold units which were used to solve a labor shortage for cotton pickers in Arkansas in 1948.

In 1950, Western cotton growers were using mechanical pickers to harvest upwards of 50% of their crops and by the early 1960's hand picked cotton was a thing of the past in the West. The Southern growers soon followed suit and the age of hand picked cotton ended.

After 1960 almost the entire industry used mechanical pickers... and new social problems arose, but the end of hand picked cotton came about slowly from 1936-1960. Most of the fears of vast unemployment in the South were not realized as people adapted. It was not the best of times, nor was it the worst of times, but cotton flourished as a commodity.